Two key political parties have united behind a single candidate in the Hamilton West by-election.

The New Conservative Party and ONE Party have made the decision that “Working Together” is in the best interests of the electorate and New Zealand.

The cooperative campaign with both parties demonstrates an ability to work together for the benefit of Hamilton West and New Zealand as a nation.

It is a landmark manoeuvre in New Zealand by-election politics.

The parties have nominated candidate Rudi du Plooy. Du Plooy holds his membership with The New Conservative Party but says his campaign will reflect the combined parties’ Charter. This document outlines the key principles in which the parties are aligned and addresses sovereignty, democracy, freedom of speech, human rights and other fundamental issues. 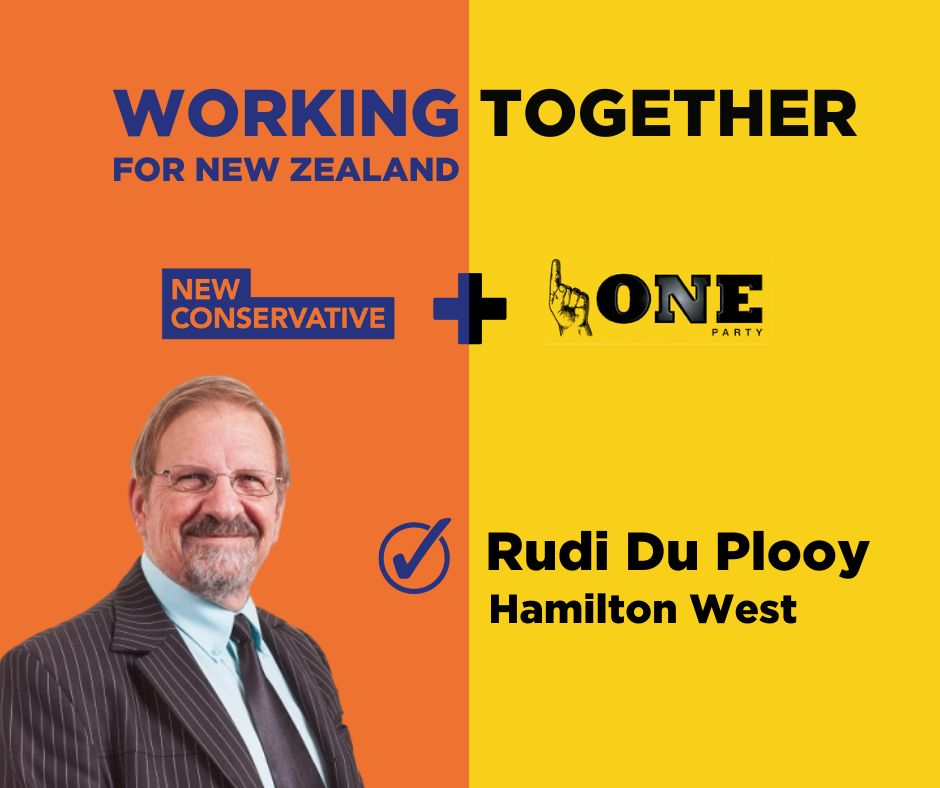 Du Plooy, who holds a diploma in law, is the current president of Hamilton Grey Power and the Vice President of the Hamilton Ratepayers' and Residents’ Association. He has founded and run many businesses internationally. He considers himself to be a committed community orientated politician. “My motivation to be involved in politics is not because of what I gain by it, but rather what I can contribute, and add to, society.”

Having lived in Hamilton West for seven years, Du Plooy is acutely aware of the local issues. His key campaigns for the electorate include the cost of living crisis, addressing crime, especially in the form of ram raids, and the local police station in Dinsdale will be reinstated. He will oversee the upgrade of the Dinsdale roundabout for the safety of cyclists and pedestrians. He will address the design and construction failures of the Waikato expressway and the wage and health concerns of firefighters. Du Plooy says “it is an honour to be nominated to represent Hamilton West on behalf of both parties.”

The campaign will focus on the parties’ commonalities including those outlined in the Charter. The parties also have an understanding as to how they’ll manage important policy differences: by clearly communicating these to the public as they arise. This is key to maintaining parties’ own identities while working together effectively for the betterment of New Zealand.

Ted Johnston, co-leader of the New Conservative party states “The co-aligned parties maintain their identity, policies and principles”. It is what MMP was built for, and democracy at its best.

Ted also states “Mighty oaks, from little acorns grow.” “We are building a coalition that will finally allow the public to vote for what they want. Not just vote against the party they don’t want in the government.”

“It is a win-win situation. Especially for the voters.”

Helen Houghton, co-leader of New Conservative states “A major part of our campaign are policies to help the public with the cost of living crisis. The government and other parties are ignoring the suffering this is causing.”

After the by-election the parties will reassess the arrangement and look at the possibility of continuing the mutually beneficial relationship heading into the 2023 general election.

“We are actively seeking more parties to join our Coalition if their principles are aligned with our Charter” said Ian Johnson, co-leader of the ONE Party. “For this by-election there was very little time to get something off the ground, however we are very happy that our two parties have aligned for the good of New Zealand.”

The parties are pleased with the opportunity that the Hamilton West by-election has offered to demonstrate that political unity is possible in order to do what is best for New Zealanders. To do what many others have aimed for, but we are now starting to achieve.